A week before Fasnacht, we had the opportunity to visit a Cliquekeller.

A Cliquekeller is a clubhouse of sorts for a Clique (group), and is usually housed in a cellar of a nondescript building. A Cliquekeller is not usually easy to find, and intentionally so, as the planning and preparation of each Clique’s “Sujet” (theme) for the upcoming Fasnacht is kept secret until the day itself.

There are, however, occasions when the Cliquekeller opens its doors to outsiders, namely during Fasnacht itself, when food and drinks are sold as part of the festivities. Sometimes the Cliquekeller is rented out for private functions, as a means of earning side income for the Clique.

At other times, the Cliquekeller is opened for a small group of outsiders and a member of the Clique gives a brief presentation about the history and traditions of Fasnacht. Mr. TH’s office organised such an event, and we managed to sign up for it. 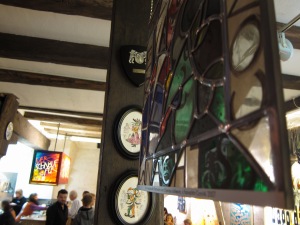 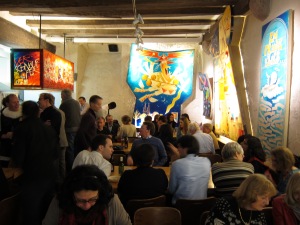 There, we settled ourselves down with drinks and cheese tarts as Kevin, a member of the Verschnuuffer Clique, gave us an insider’s view on Morgenstreich, Cortège, Guggemusik and other traditions behind Fasnacht.

He explained the meanings behind some of the Baseldütsch terms used in the celebrations, such as Drummeli and Bummel, and taught us how to distinguish the different participating groups: the Cliques with their piccolos and drums, the Alte Tante in their horsedrawn carriages, the Guggemusik bands with their slightly off-key but catchy tunes, and a few others.

We learnt the Do’s and Don’ts of the festival;

Kevin also explained to us the importance of the “Sujet” (theme). Every year, a Clique will have a different Sujet, which is decided by the members of the Clique. The costumes, masks and lantern are designed to reflect the Sujet. The Sujet may carry a political or social message, or it may just be some random theme. Sujets can be comical, satirical, serious or melancholic. Most Cliques also print out poems on coloured pieces of paper, called “Zeedel”, which are handed out to spectators. The poems are meant to explain more about the Sujet. Unfortunately everything is in Baseldütch, so unless you’re a local, you won’t be able to fully appreciate the message. But by looking at the costumes and the lanterns, you can sort of guess what the main theme is.

By the end of the evening, we left with tummies filled with cheese and onion tarts, and with a greater appreciation of what locals deem the three most beautiful days of the year.