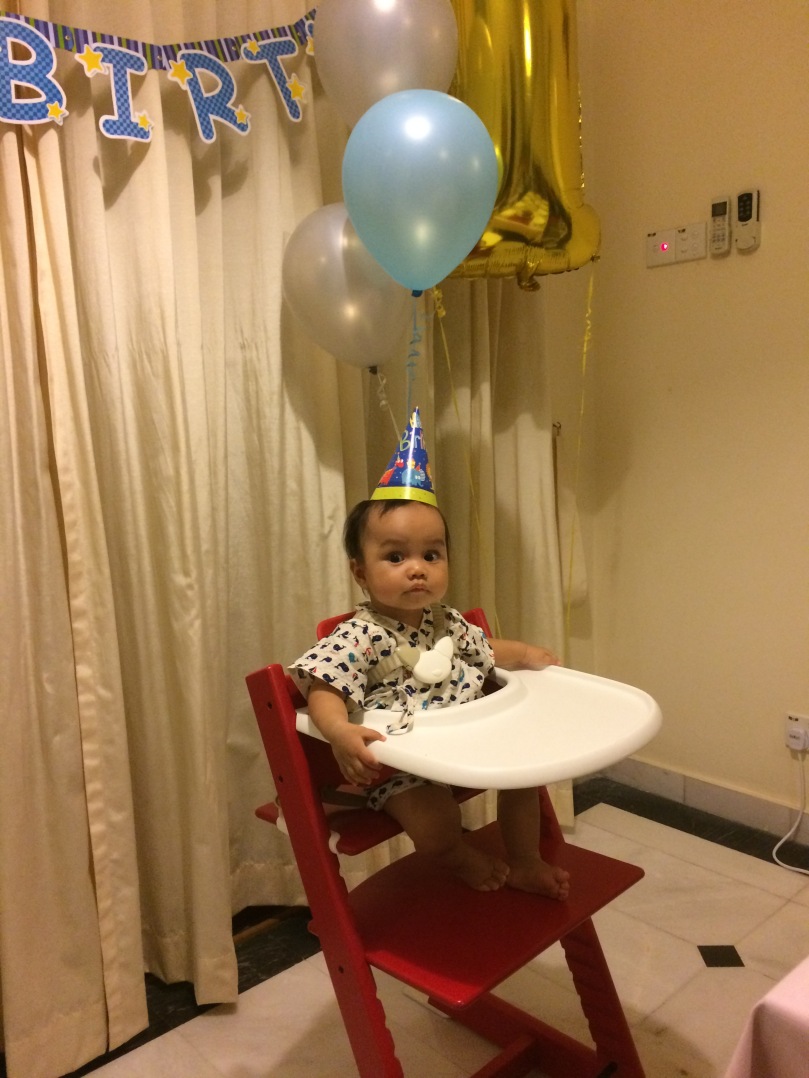 Hatta, formerly known as Peanut, celebrated his first birthday yesterday. It’s crazy how quickly time flies. To think that in the time Trump hired and fired a slew of key White House officials, Hatta grew from a tiny baby barely capable of anything but eating and sleeping, to an energetic, chatty, and happy toddler, always talking, always moving, and always pointing to something or other.

In that time, I have learnt a few things.

I’ve learnt that your stomach muscles are called core muscles for a very good reason. In my postpartum days, my stomach muscles were completely shot. Having delivered via C-section, I had very limited mobility. Every single movement (even reaching up to switch on the lights, would you believe it) was painful. I realised then, that you engage your stomach muscles in every thing you do. Every step, every turn, everything. I lamented the sit-ups and the crunches I never did in my younger days.

I’ve learnt that the moments you remember the most aren’t the typical milestones you’d expect. It isn’t Hatta’s first smile, or his first laugh, or the first time he said “mammamma” that I recall. I note those moments down in his baby journal, of course, but without flipping through it, I wouldn’t be able to remember the exact dates those things happened, or how old he was at the time.

What I do remember, however, is how he used to love dancing to Hawaii Five-O, or how he used to wave at his reflection every time I held him in front of the mirror and told him to “say hello to Mirror Hatta!”. I remember how we had to change his nappy in the car boot, because there weren’t any nappy changing rooms in the vicinity. I remember losing my temper when he was unusually cranky and crying incessantly, and I remember telling him sternly, “NO”, when he wanted to mess up the books on the shelf – and his reaction when he realised he was being scolded.

I’ve learnt that the challenges changed as Hatta moved from one stage to the next. In the beginning it was the round-the-clock feeding-nappy changing-sleeping routine. As he grew older and began sleeping through the night, it was his increased mobility and curiosity which posed a challenge.

At risk of contradicting myself, I’ve also learnt that over time, things become relatively easier. I say “easier” because you get used to it, and develop a routine. You also learn how to build in flexibility in that said routine, as your baby grows and acquires new habits. You learn to read the cues and you begin to understand the reasons behind the cranky episodes and crying fits. But “easier” doesn’t mean it gets any less tiring. It doesn’t mean you’re not at risk of losing your sanity, either. It still takes a village to raise a child. I still need time for myself; a pursuit or a hobby that is mine and mine alone, that has nothing to do with babies or parenting. I still need normal social interaction that revolves around normal, everyday topics.

When I excitedly began buying the tools and supplies for a new hobby, The Mister jokingly asked when he could see the “ROI” – Return On Investment – on my “capital expenditure”.

I told him he was already seeing the ROI.

Jokes aside, it has been quite an eventful year. We survived it, and may we have the strength and stamina to face the years ahead.

I try not to post too many photos of Hatta on social media, for various reasons. But it’s a special occasion, so I made an exception this time.